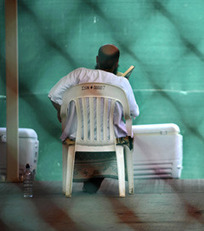 Prosecutors in the Office of Military Commissions at Guantanamo Bay have informed some attorneys defending “war on terror” detainees that their clients could be removed from the indefinite detention list and eventually released from the prison facility if they agree to cooperate and testify against certain prisoners selected for prosecution before the tribunals, according to emails obtained by Truthout and interviews with a half-dozen military defense lawyers who were briefed about the discussions.
Via truth-out.org