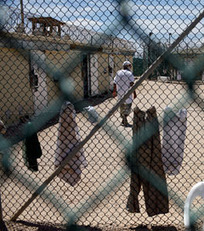 The UK action charity Reprieve, whose attorneys represent over a dozen prisoners at Guantánamo Bay, reports that former Guantánamo prisoner, Algerian citizen Abdul Aziz Naji, has been sentenced to three years in prison in Algeria. Reprieve says the charges were “of past membership in an extremist group overseas – a charge derived from the unsubstantiated accusations the US administration made against him in 2002.”
Via truth-out.org