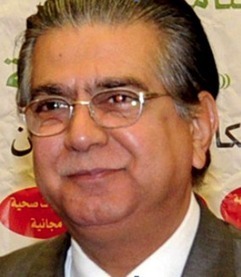 “I was arrested at SMC on 12th April 2011, by masked security officers of the Ministry of Interior, and was beaten up brutally and punched in the head. I was blindfolded with a cloth tightly wrapped on my eyes, thrown into a police car and taken to a Qalaa’ clinic for medical screening, where it was revealed that I had hypertension and that my BP (Blood Pressure) was on the high danger level of 230/120mm. All the attempts of the doctors to reduce my BP to normal (120/80mm) failed and then it was decided to transfer me to the Bahrain Defense Force Hospital (BDF) in Western Riffaa’ area, where they could only manage to reduce my BP to190/110 – 180/100mm. They then transferred me to the Drug Section of the Department of Criminal Investigation Division at the Ministry of Interior which is located in Al-A’dlyia area, where a room had been allocated for the purpose of the interrogation of the prisoners by the military prosecution on behalf of the military. Here we were subjected to physical torture using all different torturing methods and means and tools (including electric shocks). I was beaten up on my face, head, hands, legs, back and coccyx, because of which I lost the sensation in the fingers of my left hand. They threatened me with sexual assault, hurled insults at me and on my family and relatives, cursed and swore at me and spat on my face. They even insulted my religious and spiritual beliefs.”
Via doctorsinchains.org