PHNOM PENH – Earlier this week, Swedish national Gottfrid Svartholm Warg was deported from Cambodia to Thailand under the escort of Swedish officials who then forced him to board a plane to Sweden.

From his arrest in Phnom Penh two weeks ago up until Tuesday, Cambodian and Swedish authorities remained tight-lipped, saying only that Svartholm Warg was arrested for copyright infringement as a co-founder of major online file-sharing site, Pirate Bay.

Soon after Svartholm Warg arrived in Sweden, it became clear to his associates that he had been brought home for reasons beyond his one-year prison sentence and multi-million dollar fine for Pirate Bay’s activities and that he could face charges related to his association with whistleblower website WikiLeaks. He was also charged on arrival with hacking tax records.

I am reading The Nation

Check-in to The Nation on GetGlue.com 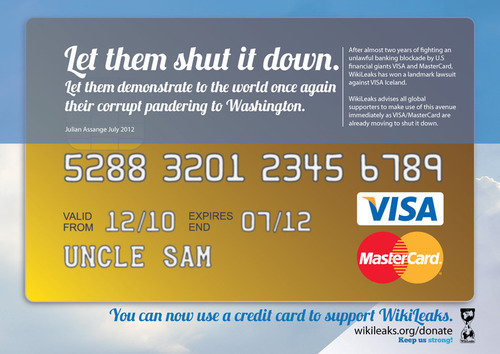 The French credit card system, Carte Bleue, is coupled with the VISA/Mastercard system globally. VISA and Mastercard are contractually barred from directly cutting off merchants through the Carte Bleue system. The French non-profit FDNN (Fund for the Defense of Net Neutrality- Fonds de Défense de la Net Neutralité), has set up a Carte Bleue fund for WikiLeaks.

WikiLeaks advises all global supporters to make use of this avenue immediately before VISA/MasterCard attempts to shut it down.

…for setting the example for how a company should act in order to protect its users’ privacy.

…Twitter has gone out of its way to fight for its users privacy. The company went to court, and was successful in asking the judge to unseal the order (something it is not required to do), and then promptly notified its users, so that they could seek to quash the order. Twitter could have quite easily compiled with the order, and would have had zero legal liability for doing so. In fact, many other Internet companies routinely hand over their users’ data in response to government requests, and never take steps to either have the orders unsealed, or give their users notice and thus an opportunity to fight the order.